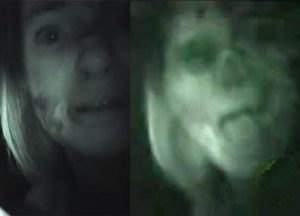 “I am Teresa Fidalgo and if you don’t post this on 20 other photos I will sleep with you forever, A girl ignored and her mom died 29 days later. You can even search me on google.” (sic)

Nowadays, Slender Man and other ghosts, like Teresa Fidalgo, are breaking WhatsApp and Instagram. It seems that nostalgia for the internet is beyond pop culture. However, before we can figure out whether it is true or false we have to understand what the source of all this is;

The story began in 1983 when a young girl named Teresa Fidalgo was killed in a car crash near Sentra, Portugal. After 20 years of this accident, on July 12, 2003, the footage came out on the internet and quickly became viral.

In the video: Three friends are driving in a dark night in a car while discussing ghosts and other such things. They then saw a young woman walking on the side of the road.

They invite her into the car for a ride. She seems like a good-looking and quiet girl. While driving, the girl points to a part of the road and says this is where I was killed in an accident. In a while, her face gets covered with blood, she screams, the car crashes, and the video ends.

According to the subtitles, one man and one woman died, while the third passenger, named David, survived. However, he wasn’t able to elaborate much on what actually occurred that night.

Police discovered that a girl named Teresa Fidalgo died in a car accident back in 1983 in that exact location.

Here is the video of what happened that night.

One person commented on the footage: “This is real. Two people I know were driving at the same time and saw this girl in the white dress cross the road or try to commit, but some guy pulled her off the road. Then they said the police came and as they did a U-turn to see what was going on the girl and the guy and the police disappeared. Now, as they were telling a friend and me, my friend told them about this video and described the girl, and they said it was her..”

The Reality of Teresa Fidalgo Story:

Let me tell you one thing: This footage is real, but the story was fake and based on a writer’s script. The film was presented by a Portuguese filmmaker named David Rebordao. This film is called “A Curva.”

The writer and producer of this film, David Rebardao, stated in an interview with a local news channel that the story was not real. The story seems similar to the legend of the White Lady, which has been told throughout the world.

With these facts in mind, it is easy for you to verify that the message spamming the internet that states “if you do not post this on 20 photos, I will sleep with you forever.” is fake. And if it is sent to you, you can ignore it and just tell him/her and all your friends that the message is fake.

There may have been an accident in 1983 involving Teresa Fidalgo, but the footage you saw was not a true story. It was just for the audience’s entertainment.

The film was produced by David, but he had good intentions when he filmed it. He just wanted to warn us to never pick up a stranger walking on the road as it is dangerous nowadays. As well as to use common sense to determine whether the ghost is real or fake and whether ghosts exist or not.

One more thing before I conclude this article: this story brought a lot of fame to David Rebardao, and he was very inspired by the success of it. Therefore, he decided to add one more video to this series. He recently released a short film with the title Teresa Fidalgo ghosts strikes again.

Here he shows a girl in white clothes like a ghost, and he pretends that this ghost is real, and the ghost attacks a man and kills him. Click Here to know exactly what happened that night and to watch the new footage that was recently uploaded by David Rebardao.

You should also know about Princess Qajar, the hottest internet sensation who is becoming popular on the internet these days.

I want to warn you to be aware of all this as it will be viral on the internet in a short period of time. It is a scripted story and not a true story. You’ll see more videos from David in this series because he is getting a lot of fame.

Here are the answers to all the questions in your mind;

Who is Teresa Fidalgo?

Teresa Fidalgo is an online ghost-like White Lady Legend, who went viral in 2014 on WhatsApp and Instagram.

Is it true that Teresa Fidalgo will sleep by your side?

No, it is not true, and the message spamming on Whatsapp and Instagram is also fake.

Is it true that my mom will die if I ignore it?

No, your mom will not die. You and all your family members are safe. The viral message is fake.

Why is everyone talking about Teresa Fidalgo?

Because Teresa Fidalgo is nowadays a very famous and viral ghost on the internet, but it is fake, if you receive a message with her name, you can ignore it.

Yes, according to Portugal police, a girl named Teresa Fidalgo dies in 1983 in a car accident.

How real is the video of Teresa Fidalgo?

The viral video footage is real, but the story shown is scripted, and the film is called “A Curve” (a curve). The film was directed by a Portuguese filmmaker named David Rebardao.